… we are older than the hills 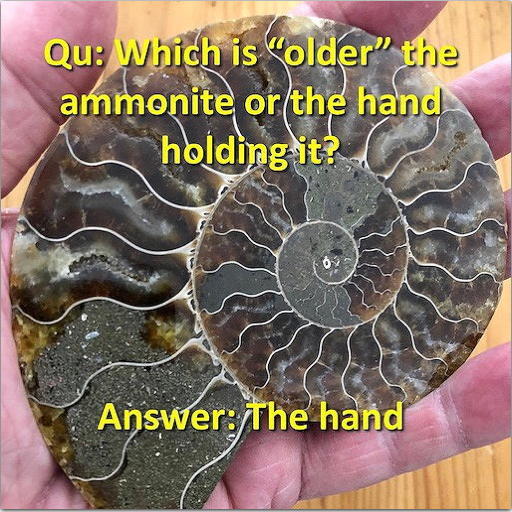 Saying how old something is, its “age” depends on your frame of reference, knowledge and beliefs. There are actually two accurate answers to this question:
1) the hand; or
2) the same age.

The incorrect answer is “the ammonite” despite being conventionally ~120 million years “old”. That is, when it “died”.

1) Every living thing of planet Earth that is now alive has been alive “forever”. “Forever” here means the length of time from when life first began on Earth, perhaps 3.5 billion years ago, to now. All living things since then are “brothers” and/or “sisters” (assuming life as we now know it - at least for eucaryotes - began “once” here on Earth). All living things from the smallest single celled to the largest multi-cellular have been living outside, alongside and inside each other since then (just look at our microbiome). The thin skin of life on Earth that is the biosphere is “older” than the rocks it spreads upon. The rocks have moved, melted and worn away over millions of years. The ammonite from Madagascar died some 120 million years ago and has since been filled with brown calcite crystals. The hand is from a being merely decades since its “birth”. The truth is the being with the hand had ancestors who were alive when the ammonite died. They lived on. That being contains within it threads of “information” or patterns handed on (and altered) through countless generations in a continuous flow since the beginning of life on earth. This also means that all beings living in the present moment “the now” are the same age; no matter how long since their “birth” into their current life.

2) The ammonite and the hand could both be “the same age”, which is the age of the universe.

Any other answer will inevitably become tied down with definitional fine print.

Some Fine Print: By some reckoning one’s whole body is “renewed” in about 7 years so that all the atoms in it might be different, and hence younger than the ammonite. The ammonite on the other hand may still have many of the same atoms as it did 120 million years ago (hence the capacity of scientists to give it an “age”). Some of the ancient information contained in the hand is what makes that hand. While it has evolved over time, and its constituent atoms are different, is has at its core the essential property of being alive.

Some More Fine Print: By some reckoning the atomic elements important to Earth and life (including “shareful” carbon) were created by fusion in stars before/during the arising of our solar system. If so, the “age” of individual atoms (or whatever stuff they really are) in their current forms will vary. Some such as Hydrogen were mainly generated in what current thinking suggests was a Big Bang. However, all those constituents are derived from the energy (mass-energy equivalency) of our universe.

Some More More Fine Print: There will be exceptions to statements in the Fine Print above indicating the infinite complexity of the universe.

© 2017-21 This work is licensed under a Creative Commons Attribution-NonCommercial-ShareAlike 4.0 International License.